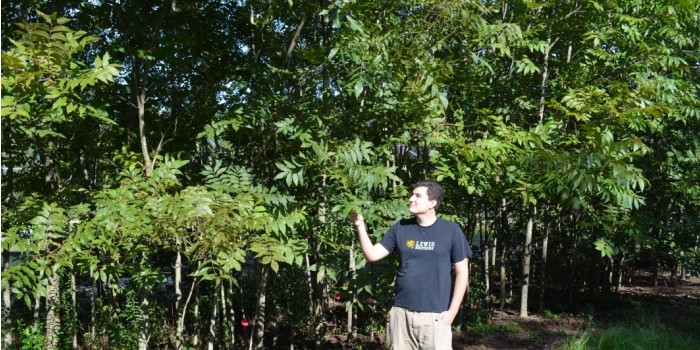 In the mid 1980s, Dr. Tim Brenneman discovered a fungus growing in the soil around pecan (Carya illinoensis) trees in commercial orchards in south Georgia. Dr. Richard Hanlin, mycologist at the University of Georgia, confirmed that it was indeed a true truffle, and identified it as Tuber texense. This species was originally found and described in Texas, and has since been found in Florida. It was consistently found in association with pecan in those states as well. Subsequent studies by Dr. James Trappe have determined that T. texenseis synonymous with T. lyonii, and that the latter name is the most valid. This reclassification greatly expands the known geographical and host range of this truffle (specifics).

Regardless of nomenclature, this truffle thrives in some pecan orchards and, in favorable years, can be found readily. Some growers report sweeping them up with the pecans at harvest, only to separate them out with sticks, rocks, etc. and disposing of them.

There has been interest in these truffles from a culinary standpoint, and indeed a variety of chefs have experimented with them. The general feeling is that they are very good and have potential as a food commodity.

It should be made clear that although this truffle is the same genus, it is very different from the renowned white (Tuber magnatum) or black (Tuber melanosporum) truffles, found primarily in Europe. T. lyonii is considered a white truffle, but it is a unique fungus with a flavor and texture all its own. Its association with the majestic pecan trees found throughout the Deep South gives it a special appeal.