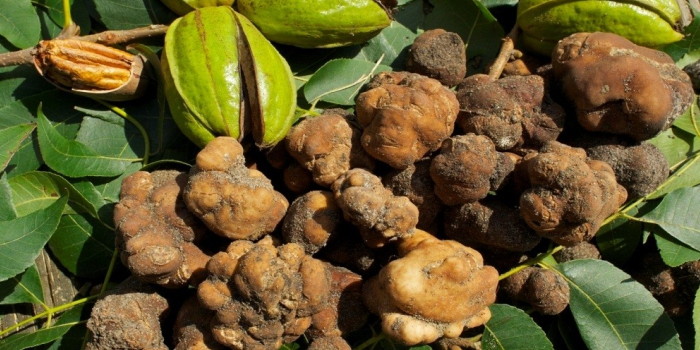 A significant aside to Dr. Brenneman’s pecan program is an interest in truffles.   In the mid 1980s, he discovered a fungus growing in the soil around pecan (Carya illinoensis) trees in commercial orchards in south Georgia. Dr. Richard Hanlin, mycologist at the University of Georgia, confirmed that it was indeed a true truffle, and identified it as Tuber texense. This species was originally found and described in Texas, and has since been found in Florida. It was consistently found in association with pecan in those states as well. Subsequent studies by Dr. James Trappe have determined that T. texense is synonymous with T. lyonii, and that the latter name is the most valid. This reclassification greatly expands the known geographical and host range of this truffle.  It has currently been found from New Mexico to the east coast, and from Quebec down to northern Mexico.  Most reports are from Georgia and Florida, which is interesting as both states are outside the native range of pecans.   Regardless of nomenclature, this truffle thrives in some pecan orchards and, in favorable years, can be found in abundance. Some growers report sweeping them up with the pecans at harvest, only to separate them out with sticks, rocks, etc. and disposing of them.

Dr. Brenneman has been studying  pecan truffles for over 30 years.   Collaboration with Dr. Rytas Vilgalys at Duke resulted in a much better understand the biology of these fascinating fungi.  In recent years Brenneman has also collaborated with two former members of the Vilgalys’ lab, Dr. Matthew Smith at UFL and Dr. Greg Bonito at MSU.  Their expertise in molecular mycology has greatly expanded our knowledge of the mycorrhizal community associated with pecans, and has recently resulted in identification of two new truffle species from pecans.  This work was published in Mycologia (2018) by Dr. Smith’s student, Arthur Grupe, who described two Tuber species formerly known as Tuber sp. 36 and Tuber sp. 47  as T. brennemanii and T. floridanum.

One focal point is to develop a method for inoculating pecan trees with the fungus so that they will eventually produce truffles consistently.  In fact, the first time this was done (actually producing  pecan truffles from inoculated trees) was in Brenneman’s small research orchard in Tifton, GA.  The trees were inoculated in 2001 and the first truffles were harvested in 2012.  Since then a larger trial nursery was established on a commercial model with raised beds under plastic, drip irrigation, and pre-plant methyl bromide application.  This project demonstrated that inoculations can be done on a larger scale, and the trees produced were transplanted in multiple sites in the winter of 2018.  One site is at the UGA Ponder farm near Tifton where replicated studies will evaluate the effects of preplant fumigation, soil pH, etc. on the survival and fruiting of the fungi.  The site includes plantings of pecan trees inoculated with Tuber borchii and Tuber aestivum (compliments of Dr. Bonito) as well to determine if they will produce truffles on this host in south Georgia.

There is great interest in pecan truffles from a culinary standpoint, and they are currently harvested on a very limited basis in Georgia.  This is still a cottage industry with a small but expanding group of individuals harvesting truffles from local pecan orchards and directly marketing to individual restaurants.  The market price has been about $200-$400 a pound, but there are reports of higher prices for large, top quality specimens.  Higher prices are also obtained for truffles found with dogs, which are generally of higher quality and have a stronger aroma.  This is also a more sustainable method (versus random raking) as only the more mature truffles are harvested.  There is even a fledgling industry in Georgia training truffle dogs, and some individuals have trained their own dogs.  Dogs trained to hunt other species of truffles have been very quick to adapt to pecan truffle hunting as well.

Overall the potential seems clear for truffles to develop as an additional cash crop for pecan growers, and perhaps offer expanded opportunities for agritourism.   The Cohen’s, a pecan-growing family in Brinson, GA are already marketing pecan oil in addition to pecans, and recently added a pecan truffle oil to their offerings (www.PecanRidgePlantation.com).  Although it is made from an extract of Black winter truffles, they do find and sell limited amounts of pecan truffles from their orchards.  They even purchased a professionally trained truffle dog to facilitate their harvest.

It should be made clear that although this truffle is the same genus, it is very different from the renowned white (Tuber magnatum) or black (Tuber melanosporum) truffles, found primarily in Europe.  Tuber lyonii is a white truffle, but it is a unique fungus with a flavor and texture all its own.  Chefs love them, and are fascinated to have such a distinctive, locally produced addition to their menu.  Its association with the majestic pecan trees found throughout the Deep South gives it a special appeal, and the utilization of this fungus appears to be limited primarily by our ability to grow and harvest it in commercial quantities. 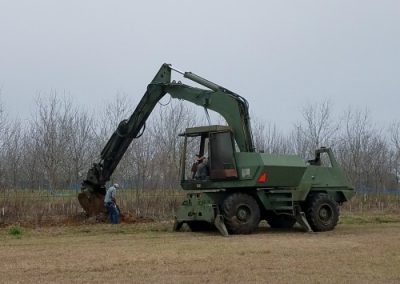 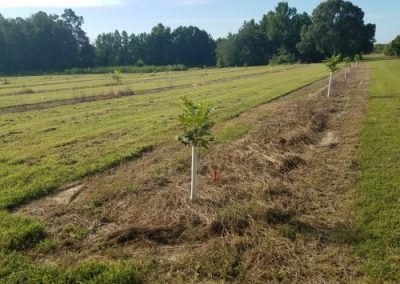 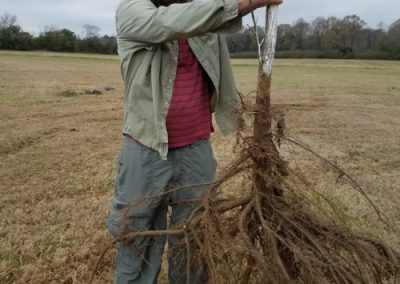 Arthur Grupe (grad student at UFL) with an inoculated tree ready to transplant. 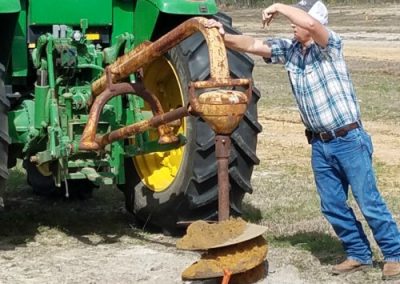